The 2020 season brought a lot of challenges to the team among which was a loss of many experienced members but the team pulled through to create our robot, Panakin. Panakin was able to compete at the Granite State Event for the 2020 FRC Challenge Infinite Recharge. At the event we were chosen by the third team captain. We were also awarded the Judge’s award for our community outreach. We were unable to host our North Shore District Event this year as the season ended early due to the COVID-19 worldwide pandemic.

With a continuous growth in team membership, our team competed in the 2019 FRC Challenge Destination Deep Space. With our robot Penumbra, we competed at the Granite State Event and New England District Championship. For the sixth consecutive time, we hosted the North Shore District Event, winning the event as a team captain.

In 2018, our team experienced a growth in not only membership, but also in corporate and local sponsorships. To participate in the 2018 PowerUp challenge, our team competed at the South East Mass District Event with Pnoname, our elevator robot. As with previous years, Pnoname competed in the North Shore District Event, hosted at Reading Memorial High School.

The astonishing growth of the Robockets was manifested in 2016 when the team was awarded the Chairman’s award and was one of the youngest teams to ever do so in FIRST. In 2016, the team also began hosting an annual Science Expo in the local town of Reading to encourage interest in STEM in the community. 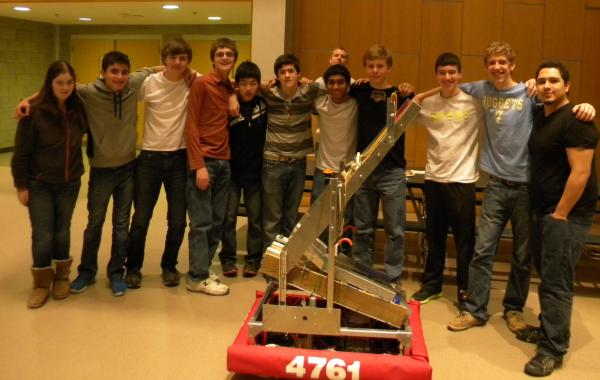 FRC Team 4761, “The Robockets” assembled in 2012 to support students emerging from FLL programs as they entered Reading Memorial High School. The 2013 Ultimate Ascent FRC Challenge was our team’s first season. The team, comprised of 18 students and 5 mentors, competed in the Boston Regional event without any funding. Here we won the Rookie All-Star Award and were claimed to be the Highest Rookie Seed. As Rookie All-Stars, we also qualified and attended the World Championships in St. Louis that year.